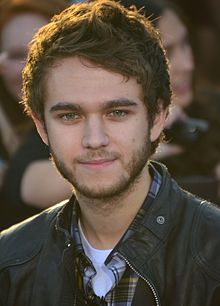 Anton Zaslavski, better known as Zedd , is a Russian-German musician, music producer, and DJ, who is the father of  song "Clarity" - the number 8 on the BillboardHot 100 as well as the number one of the US Hot Dance Club Songs; and "Break Free", a song which peaked at number 4 on theBillboard Hot 100 and number 1 on the Hot Dance/Electronic Songs.  He primarily produces in the electro house genre, but gradually switched to  progressive house, dubstep, and classical music. On 23 February 2015, Zedd released his collaboration with Selena Gomez, titled "I Want You to Know".

He also won a Grammy award for Best Dance Recording at the 56th Grammy Awards for "Clarity".

Zedd grew up and began his career in Kaiserslautern,Germany. He is a classically raised musician by his parents who were both musicians. He began playing the piano at the age of four and drums at twelve.

He was invited to produced Born This Way voiced by .

Musician Anton Zaslavski were born on Saturday, birthstone is Sapphire, the seaon was Summer in the Chinese year of Snake, it is 232 days until Anton Zaslavski next birthday.