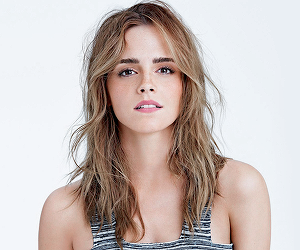 Emma Charlotte Duerre Watson, worldwide known as Emma Watson, is an amazing English movie actress, model and activist. She earned recognition since the role of Hermione Granger in the teen franchise Harry Potter from 2001 to 2011. From then on, she gradually transitioned into a popular adult model and actress, starring in some popular films like The Perks of Being a Wallflower, This Is the End, and My Week with Marilyn, and started  involvement in fashion advertising. Best Youth Performance, Best Female Performance, Best British Style are some of Watson’s prominent awards gained during her career up to now.

Emma Watson was born to a British family, both of her parents, Jacqueline Luesby and Chris Watson, are lawyers. They gave birth to her younger brother 3 years later and got divorced when she was 5. During school time, Watson studied singing, acting, dancing at Stagecoach Theatre Arts school at Oxford. Her natural instinct for performing first identified when she won a poetry competition for reciting James Reeves' "The Sea" at age 7. Watson began her professional acting career since her theater teachers suggested her to participate the casting of first novel of the best-selling Harry Potter series.

Met and started to date each other in 2011, the couple Watson and Will Adamowicz soon split after 3 years’ happiness. Later that year, she announced to be in relationship with Oxford rugby player Matt Janney but they also separated amicably in December since Watson’s unrelenting work schedule.

The meaning of the name Watson: Son Of Walter Famous Quotes

It sounds like a cliche but I also learnt that youre not going to fall for the right person until you really love yourself and feel good about how you are.

Actress Emma Watson were born on Sunday, birthstone is Diamond, the seaon was Spring in the Chinese year of Horse, it is 92 days until Emma Watson next birthday.