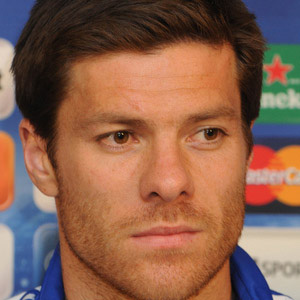 Central midfielder who began playing with the Spanish national team in 2003 and joined Real Madrid in 2009. He was named Spanish Player of the Year in 2003 and he won a World Cup Championship with Spain in 2010.He played for Liverpool from 2004 to 2009 and helped lead the team to an FZ Cup in 2006.He and fellow soccer player Mikel Arteta were neighbors growing up.

He began his professional career playing for Real Sociedad in 1999.

He and Nagore Aramburu were married in 2009; they had two kids together: Jontxu and Ane.

The meaning of the name Alonso: Noble And Ready FUN FACTS

Soccer Player Xabi Alonso were born on Wednesday, birthstone is Topaz, the seaon was Fall in the Chinese year of Rooster, it is 328 days until Xabi Alonso next birthday.